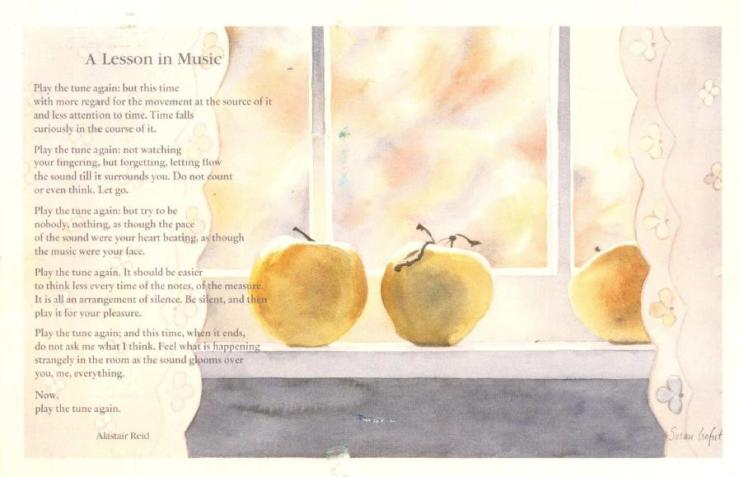 On Alastair Reid
Alastair Reid stands out for being an important literary figure in three continents ― Europe, North and South America. Alastair continues to impress with his multilayered and illuminating verses and texts which reach out to many audiences at once. The gift of a brilliant writer is to be able to touch many souls. Whether in Spanish or as Alastair would say the ‘two’ Englishes ― Scots and English English — he enchants readers by allowing us into the secrets of his world. His tone is mostly one of wonderment and joy, and we can feel the intrigue of discovering something small, curious, or lovingly familiar in his lyrical observations.

On this exhibition
Alastair Reid is to be awarded the Honorary Doctorate of Letters from Professor David Clarke at the Crichton Campus in Dumfries on 6th July 2011. To honour the world-renowned translator of Jorge Luis Borges and Pablo Neruda, the Royal Society of Edinburgh (RSE) awarded Dr Karen Peña from the SMLC, a small grant to display his work and to study his manuscripts (especially those on Borges).

This exhibition proposes to offer but a brief snap-shot of the many tones and colours of Alastair Reid’s literary life. We hope that you take away some small treasure (a poem, a verse, a line of translation) to ponder upon. If Neruda told Alastair, ‘just improve my verses!,’ we hope that you ‘steal some verses!’ and add them to the list of books and authors to read and enjoy.

Editors of From Glasgow to Saturn View all posts by glasgow2saturn